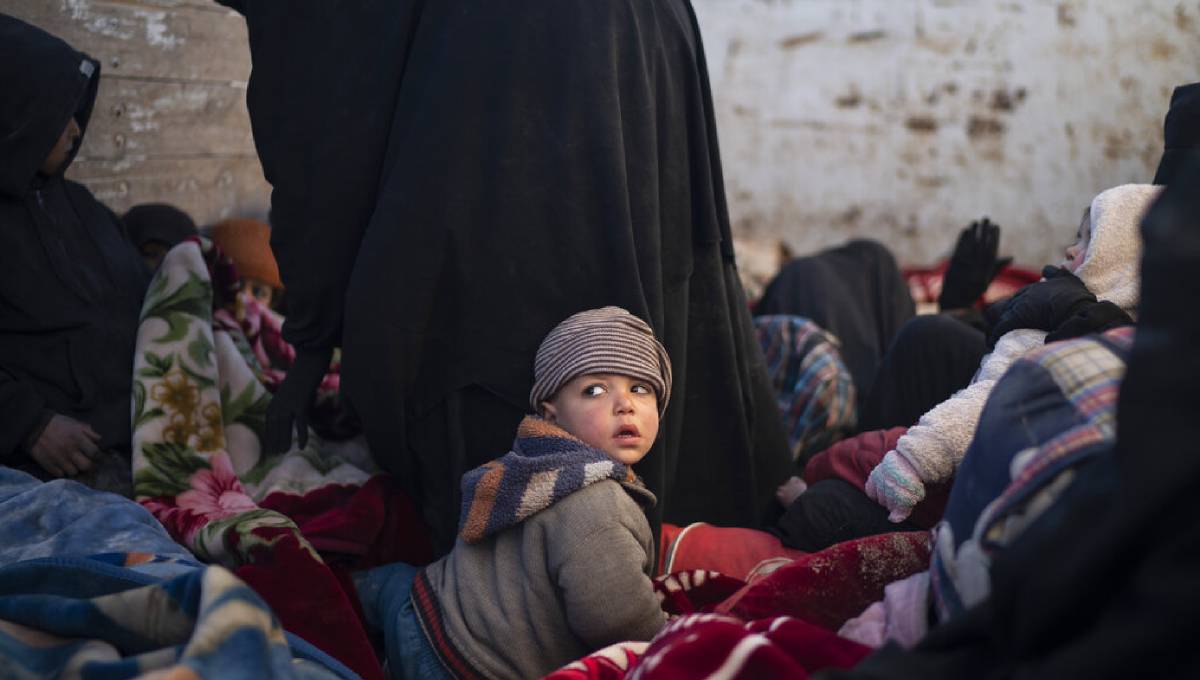 Photo: Women and children sit in the back of a truck as they wait to be screened by U.S.-backed Syrian Democratic Forces (SDF) after being evacuated out of the last territory held by Islamic State militants, in the desert outside Baghouz, Syria, Friday, March 1, 2019.

Syria, Mar 2 : U.S.-backed Syrian forces on Friday resumed military operations to liberate the last piece of territory held by the Islamic state group in Syria after evacuating thousands of civilians and hostages who have been besieged inside, a spokesman said.

Mustafa Bali said fighters from the Kurdish-led Syrian Democratic Forces have begun clashing with the militants and advancing after the last batch of civilians left the territory.

“Those left inside are fighters who do not wish to surrender,” he told The Associated Press.

The military campaign to uproot the militants from the eastern banks of the Euphrates River began in September, pushing them down toward this last corner in the village of Baghouz, near the Iraqi border. The military operation was halted on February 12 as the SDF said a large of civilians and hostages were holed up in the territory, which sits atop caves and tunnels where they had been hiding.

The remaining speck of IS-controlled land in Baghouz village is also along the Euphrates from one side and the desert near the Iraqi border from the other. Thousands of civilians were living in a tent encampment and houses along the riverside.

Over the last two weeks, thousands of civilians have been evacuated, many of them women and children in desperate conditions. The only aid group at the evacuation site, the Free Burma Rangers, estimated that at least 10,000 civilians have left the IS pocket since Feb. 20, in trips organized by the SDF.

The evacuees, who included IS family members, said food was running low and clean water and medicine were scarce. Despite its demise, many defended what remained of the group’s territorial hold, which once spanned a third of Iraq and Syria.

As they trickled out, SDF and coalition officials screened them. Women and children were transferred to camps miles away. Men suspected of links to the militant group were taken into custody at other facilities.

U.S. President Donald Trump said Thursday that IS has lost “100 percent” of the territory it once controlled in Syria, but officials estimate there are hundreds of militants left in the small patch of territory in Baghouz, and that they will likely fight till the end.

Bali would not speculate on how long the military operation might take but said he expects a “fierce battle.”

He said the battles are expected to take place in a very small area that includes a complex network of tunnels, as well as suicide bombers and land mines.

“The battle to finish off what is left Daesh has started,” said SDF commander Adnan Afrin, using the Arabic acronym for IS.

Afrin said he expects “resistance” from the remaining fighters who are likely to deploy all their weapons, including suicide bombers.

He said most of the remaining fighters are Europeans, Asian, Iraqi and Arabs from the area.

On Friday, the smallest batch of evacuees, just over 200, came out of the pocket in around six trucks used to transport sheep. About 10 trucks sent to the perimeter of the IS pocket came back empty, and drivers said no more evacuees came out after hours of waiting.

The evacuees Friday included wounded men but were mostly women and children. There were Russians, Indonesians, Bosnians, Dagestani, Kazaks, Egyptians, Syrians and Iraqis. They dragged along few belongings, distraught children and broken spirits.

Umm Mohammed — or mother of Mohammed — a 38-year-old Syrian, left Baghouz with her three children Friday but her husband stayed behind in support of IS. “There are many fighters and families inside,” she said. “The Islamic State is weak only in Baghouz but elsewhere it is expanding and growing.”

The capture of the last pocket still held by IS fighters in Baghouz would mark the end of a devastating four-year global campaign to end the extremist group’s hold on territory in Syria and Iraq — their so-called “caliphate” that at the height of the group’s power in 2014 controlled nearly a third of both Iraq and Syria.

It would allow U.S. President Donald Trump to begin withdrawing the estimated 2,000 U.S. troops from Syria, as he declared in December he would do. Though last week he partially reversed course and agreed to keep a residual force of perhaps a few hundred troops as part of an international effort to stabilize northeastern Syria.

The resumption of military operations against IS breaks a dayslong standoff while the civilians were being evacuated. In the last week alone, 13,000 people, most of them women and children, arrived at the al-Hol camp in Hassakeh province which now houses approximately 45,000 people, according to the United Nations.

In a statement Friday, the U.N. cited reports that more than 84 people, two thirds of them young children under five years of age, have died since December on their way to al-Hol camp after fleeing the extremist group in Syria’s Deir el-Zour province.

“Many of the arrivals are exhausted, hungry and sick,” according to Jens Laerke, spokesman of the U.N. Office for the Coordination of Humanitarian Affairs, at a news briefing in Geneva.