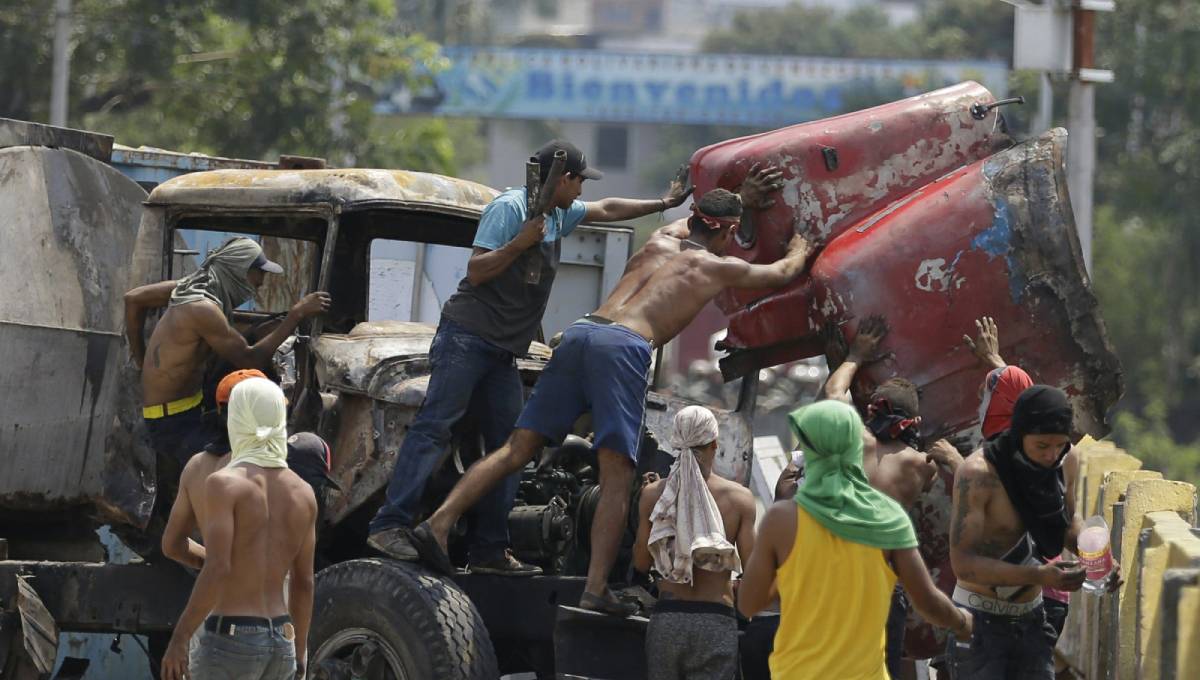 Photo: Venezuelans work to remove a roadblock created by Venezuelan National Guards on the Simon Bolivar International Bridge in La Parada, near Cucuta, Colombia, on the border with Venezuela, Sunday, Feb. 24, 2019.

Cucuta, Feb 25 : Opposition leader Juan Guaido has called on the international community to consider “all options” to resolve Venezuela’s crisis, a dramatic escalation in rhetoric that echoes comments from the Trump administration hinting at potential U.S. military involvement.

For weeks, the U.S. and regional allies had been amassing emergency food and medical kits on Venezuela’s borders in anticipation of carrying out a “humanitarian avalanche” by land and sea to undermine Maduro’s rule.

With activists failing to penetrate government blockades and deliver the aid, Guaido announced late Saturday that he would escalate his appeal to the international community — beginning with a meeting Monday in Colombia’s capital with U.S. Vice President Mike Pence on the sidelines of an emergency summit of leaders of the so-called Lima Group to discuss Venezuela’s crisis.

He said he would urge the international community to keep “all options open” in the fight to restore Venezuela’s democracy, using identical language to that of President Donald Trump, who in his public statements has repeatedly refused to rule out force and reportedly even secretly pressed aides as early as 2017 about the possibility of a military incursion.

Secretary of State Mike Pompeo has also stepped up the belligerent rhetoric, saying on CNN’s “State of the Union” on Sunday that Maduro’s “days are numbered.”

A close Guadio ally, Julio Borges, the exiled leader of congress who is Guaido’s ambassador to the Lima Group, was even more explicit in urging a military option. “We are going to demand an escalation of diplomatic pressure … and the use of force against Nicolas Maduro’s dictatorship,” he said Sunday.

It’s a prospect that analysts warn risks fracturing a hard-won coalition of Latin American nations who’ve come together to pressure Maduro’s socialist government. Most Latin American governments, even conservative ones like those in neighboring Colombia and Brazil, are on the record opposing a military solution and would face huge dissent should they back any military action led by the U.S., whose interventions in the region during the Cold War remain an open wound.

“These governments know they would face a huge tide of internal opinion greatly offended by a US-led invasion for historical and political reasons,” said Ivan Briscoe, the Latin America director for the Crisis Group, a Belgium-based think tank.

At the same time, though polls say Venezuelans overwhelmingly want Maduro to resign, almost an equal number reject the possibility of a foreign invasion to resolve the political impasse.

Resting at the foot of the Simon Bolivar bridge as work crews in Colombia began removing debris left by the unrest, Claudia Aguilar said she would support a military invasion but worries it would lead to more bloodshed.

The 29-year-old pregnant mother of three said she crossed illegally into Colombia on Sunday to buy a bag of rice and pasta for her family after Maduro ordered a partial closure of the border two days earlier.

“We’re with fear, dear God, of what will happen,” she said standing near the dirt trail she took to sneak across the border. “More blood, more deaths. The president of Venezuela does whatever he wants.”

In addition to weakening multilateral pressure against Maduro, analysts say the opposition saber rattling also risks undermining Guaido’s goal of peeling off support from the military, the country’s crucial powerbroker.

The 35-year-old Guaido has won the backing of more than 50 governments around the world since declaring himself interim president at a rally in January, arguing that Maduro’s re-election last year was illegitimate because some popular opposition candidates were barred from running.

But he’s so far been unable to cause a major rift inside the military, despite repeated appeals and the offer of amnesty to those joining the opposition’s fight for power.

“How many of you national guardsmen have a sick mother? How many have kids in school without food,” he implored Saturday night, standing next to a warehouse where 600 tons of food and medicine have been stockpiled on the Colombian border. “You don’t owe any obedience to a sadist … who celebrates the denial of humanitarian aid the country needs.”

Maduro has deftly courted support from the military since becoming president in 2013, offering top commanders key posts in his cabinet, including the presidency of state-run oil giant PDVSA, the source of virtually all of Venezuela’s dollar earnings.

More than 100 members of the security forces, most of them lower-rank soldiers, deserted and took refuge inside Colombia during Saturday’s unrest, according to migration officials. But none of them was higher ranked than a National Guard major, and there’s been little suggestion any battalion or division commanders are willing to defect despite almost daily calls by Guaido and the U.S.

To be sure, there’s no indication the U.S. is planning a military invasion and Trump has made a habit of threatening friends and foes alike — China, North Korea and Canada among them — only to dial back the rhetoric down the road. Washington still has more diplomatic tools available, including extending oil sanctions to punish non-American entities that conduct business with Maduro’s government in much the way such sanctions strangled communist Cuba for decades.

Still, as early as 2017, Trump reportedly raised the possibility of a U.S. military incursion in Venezuela similar to the 1989 invasion that led to the ouster of Panamanian dictator Manuel Noriega, both in an Oval Office meeting with then Secretary of State Rex Tillerson and other aides, as well as at a session with leaders of four Latin American allies on the sidelines of the U.N. General Assembly, according to a senior administration official who has since left the White House.

In both cases Trump abandoned the war talk at the urging of his advisers and allies in the region. Prior to the current crisis, there was never any war planning by the military, said the official, who spoke on condition of anonymity in order to discuss the private conversations.

Still, momentum toward a confrontation seems to be building as hopes for a quick crumbling of Maduro’s government fade.

“It acts like a magnet,” said Briscoe of the possibility of a U.S.-led intervention. “As Plan A and B fail, it’s where everyone seems to be going. But the further you move in that direction, you weaken the multilateral approach and reduce the possibility that large parts of the military will turn against Maduro.”

5 dead in Kashmir, shops stage boycott of crackdown by India