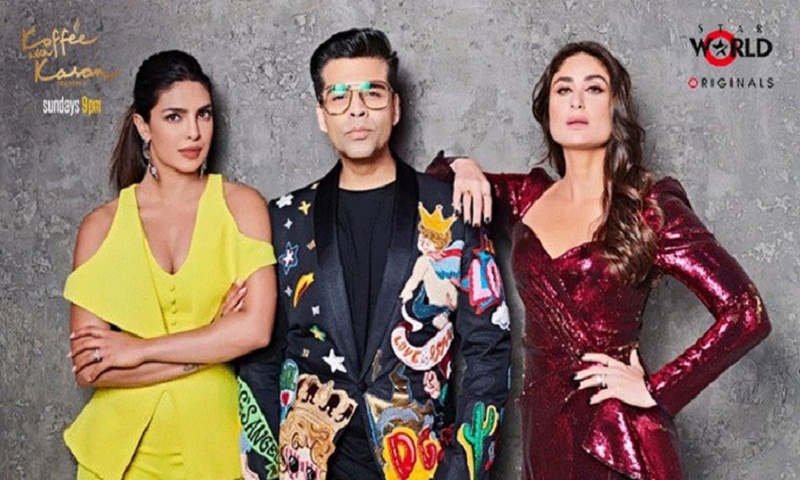 Koffee With Karan 6 is back to give you a glimpse into the lives of celebrities. This Sunday’s episode of the show will have the duo of Kareena Kapoor and Priyanka Chopra as guests.
The Karan Johar hosted talk show this season has featured many an interesting pair like Ayushmann Khurrana and Vicky Kaushal. Now it is time for two of the biggest female actors in Bollywood to engage in a candid conversation with Karan.Also, both the stars will sit on the Koffee couch after a long time. This would be Priyanka’s first appearance on the show after her marriage with American musician Nick Jonas and Kareena’s first appearance since becoming a mother to Taimur Ali Khan.

The episode will kick off with Kareena expressing why she will not work in Hollywood. She will say, “I can’t, I have always said that. I am too deeply rooted somewhere here, my family, my love, everything is here and now, of course, my child.” She will also call Priyanka a fearless version of her, saying, “I think what she has done is amazing. It’s a new fearless version of Priyanka that I see. I really credit her because I don’t think I have that ambition and determination like hers.”

Then the revelations will come pouring out. Kareena will disclose that she has never met Amrita Singh, her husband Saif Ali Khan’s ex-wife. But she will also say that she has “utmost regards for her.”

The next tidbit will come from Priyanka, who will reveal that she wanted to be a bride since she was 4. “I always wanted to be a Dulhaniya since the age of four. Everywhere I used to go, I used to dress like Dulhaniya, parties, fancy dress, everywhere.” No wonder her wedding in Jodhpur’s Umaid Bhawan Palace was so lavish and elaborate — it was her childhood dream, after all.

On the difference between the paparazzi of India with that of the US, Priyanka will reply, “It’s new for the world na Karan, just been last 15 or 10 years that this has become such a phenomenon which I think is not going anywhere…?”

Looks like another smashing episode of Koffee With Karan Season 6 is in the offing. Report The Indian Express.

Case filed against Sonakshi Sinha for ‘cheating’ an event organizer