Sinha to be brought back home, put on trial: Minister 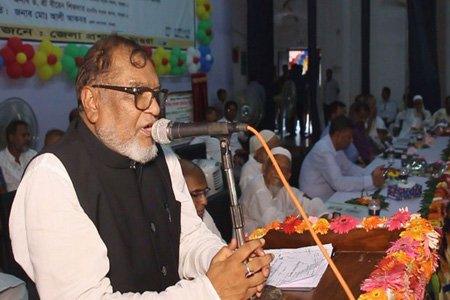 “He (SK Sinha) will be dragged back home tying in with rope around his waist and put on trial. He’ll be spared in no way,” the minister said while addressing a function marking the inauguration of the Muktijoddha Complex Bhabans of four upazilas in Moulvibazar.

He also came down hard on BNP founder Ziaur Rahman, saying he had been involved in the plot to assassinate Father of the Nation Bangabandhu Sheikh Mujibur Rahman.

Mozammel mentioned that freedom fighters will now get allowances each month instead of once in every three months.

On January 22, a Dhaka court directed authorities concerned to publish an advertisement in two national dailies asking the former chief justice and 10 others to appear before it on February 20 in a case filed on charges of misappropriating and laundering Tk 4 crore.

On January 5, the court issued a warrant for the arrest of the accused as they did not appear before it on the day.

On July 10 last, the ACC filed the case accusing SK Sinha 10 others of accumulating illegal wealth and laundering Tk 4 crore.

SK Sinha went on leave on October 2, 2017 and left for Australia on October 13 amid a row over some of his observations in the 16th amendment verdict.

Just before his departure, he had told reporters that he was not sick, contradicting the government’s claim that he went on leave on health grounds.

A day after SK Sinha’s trip to Australia, the Supreme Court issued a statement, saying he was facing 11 charges, including graft, moral turpitude and money laundering.

On November 11, 2017, he resigned from his post of the Chief Justice of Bangladesh.

Awami League has courage to punish own leaders for crimes, says Obaidul Quader