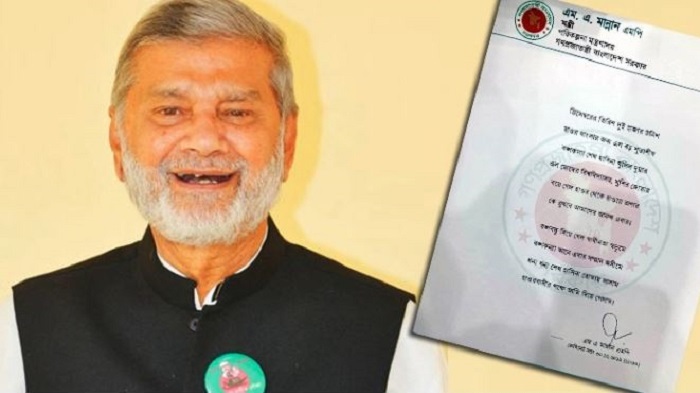 Mirror Desk : Planning Minister MA Mannan has written a poem for the first time in his life hailing the approval of the drafts of Sunamganj Science and Technology University Act, 2019, according to media reports on Monday.
This is the minister’s first ever poem that he also shared in his Facebook post on Monday afternoon, said Hasnat Hossain, the political secretary to MA Mannan.

Earlier on the day, the cabinet approved the drafts of Bangabandhu Sheikh Mujibur Rahman University Act, 2019, Sunamganj Science and Technology University Act, 2019 and Bangladesh Energy Regulatory Commission (Amendment) Act, 2019.The approval was given in the weekly cabinet meeting with Prime Minister Sheikh Hasina in the chair.

“Bangabandhu Sheikh Mujibur Rahman University in Kishoreganj and Sunamganj Science and Technology University would be like any other university,” Cabinet Secretary Khandker Anwarul Islam said, adding that when the two universities open, the number of public universities in the country will be 50.

Toast to the New Year at Four Points by Sheraton

UK’s Johnson is stable in ICU with virus, received oxygen