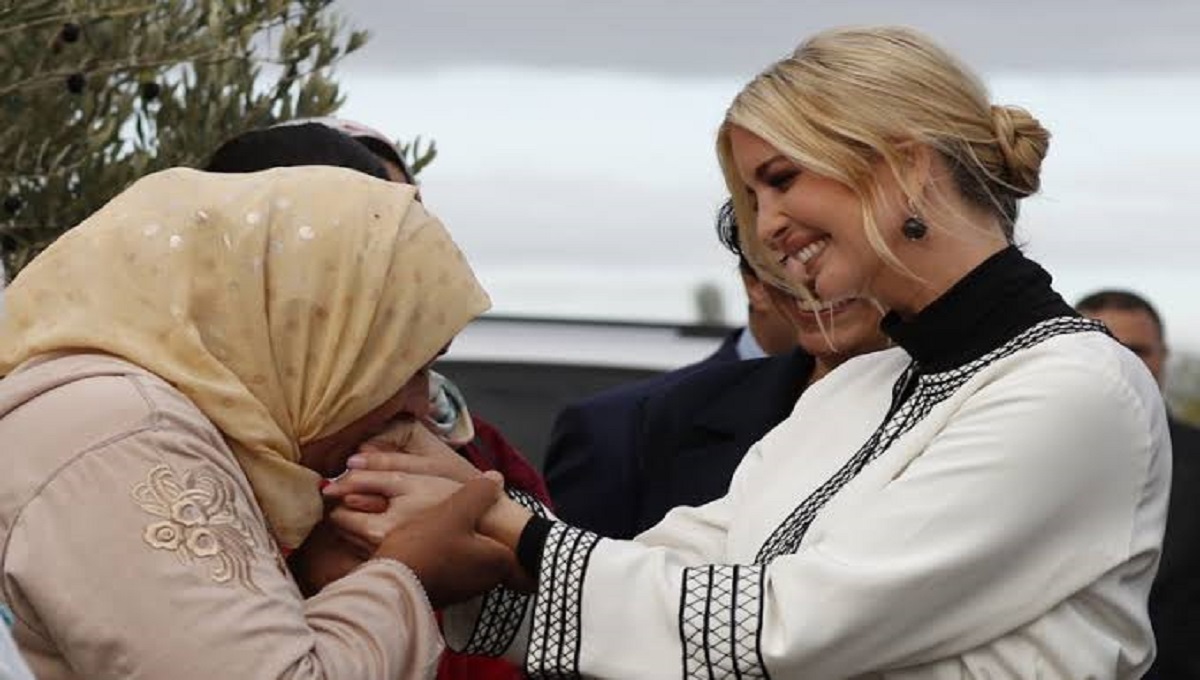 Sidi Kacem, Nov 8 : Visiting Morocco for the first time, Ivanka Trump received a warm welcome Thursday from housewives, widows and other women who are benefiting from new laws that allow them to own land.

One woman expressed her gratitude by embracing President Donald Trump’s daughter and kissing her hands.

Ivanka Trump is a senior White House adviser who works on women’s issues and has sought through an initiative to encourage developing countries to help women build wealth and financial independence by owning land or other property.

Morocco is one such nation. Working in partnership with the Millennium Challenge Corp., a U.S. aid agency, Morocco has updated its land titling laws and earned the three-day visit from the U.S. president’s daughter.

At an olive grove in a region north of the capital of Rabat, she met four women who had inherited or bought land — something they previously could not do.

She later strutted her way into a ceremony as participants banged drums and blew horns. Inside, women ululated to show their approval.

“When you invest in women, they invest back into their families and communities and countries flourish,” she said.

The festive atmosphere likely offered a fleeting diversion from daily developments back home in Washington, where House impeachment investigators continue to take depositions in the case against her father for asking Ukraine to investigate his political opponents.

She is visiting Morocco to promote the Women’s Global Development and Prosperity initiative, a U.S. government program she spearheads that has a goal of helping 50 million women in developing countries advance economically by 2025.

The initiative focuses on helping women develop job skills and succeed as entrepreneurs, along with changing cultures and laws.

Morocco is changing its land ownership laws and “we are here to support and encourage the full implementation of that,” she said.

The women she met among rows of trees bearing black olives thanked her.

Aicha Bourkib, 59, hugged Ivanka Trump, clasped her hands and kissed them. The housewife and mother of four grows olive trees and vegetables on land she recently bought. She has two cows and wants to create a dairy cooperative in her village.

Bourkib and the other women told her visitor through a translator that owning land “helps us and all the families in the area.”

The olive grove is a project of the Millennium Challenge Corp. Its CEO, Sean Cairncross, accompanied Ivanka Trump on Thursday

The two also met over tea with women leaders to discuss how to increase economic opportunities for Moroccan women.

Ivanka Trump strolled through the medina, a popular street overflowing with local artisans selling rugs, clothing and other crafts on her way to the restaurant.

The president’s daughter also spoke by telephone with King Mohammed VI to thank him for “meaningful recent legal reforms to advance gender equality in Morocco,” she said on Twitter.

Dressed in a glittering champagne-colored caftan on loan from the king, Ivanka Trump capped the night at an intimate dinner party on the palace grounds, hosted by Princess Lalla Meryem.

Sanders wins big in Nevada but some Democrats worry