Essex lorry deaths: Bodies of victims have all been identified 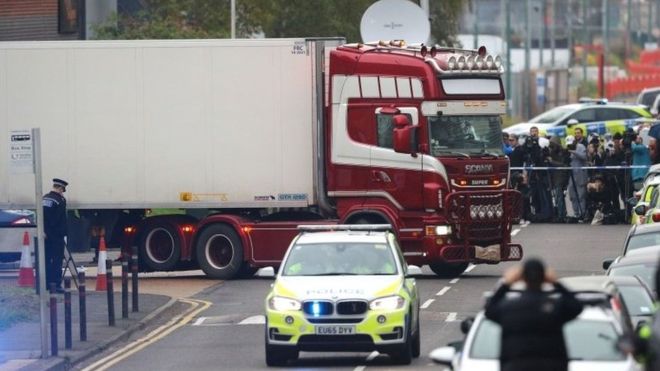 The identities of 39 people found dead in a refrigerated lorry have all been formally identified, police said.
Essex Police had been working with Vietnamese officials to identify the 31 men and eight women found dead in Grays, Essex, on 23 October.

A series of files have been handed to Essex senior coroner Caroline Beasley-Murray.The force said it wanted to give families time to take in the news before making the names public.

The victims came from Vietnamese provinces Haiphong, Hai Duong, Nghe An, Ha Tinh, Quang Binh and Hue, according to police in the country.

Assistant Chief Constable for Essex Tim Smith said identification was “an important step” in the investigation.

The bodies were found on the Waterglade Industrial Estate after the container had travelled to nearby Purfleet from Zeebrugge, in Belgium.The driver of the lorry, Maurice Robinson, from Northern Ireland, appeared in court last week charged with a number of offences, including 39 counts of manslaughter.

Extradition proceedings have also begun against 22-year-old Eamonn Harrison, who was arrested in Dublin on a European Arrest Warrant.

Police are also seeking two brothers from Northern Ireland, Ronan and Christopher Hughes, who are wanted on suspicion of manslaughter and people trafficking.

There have been 11 arrests in two provinces of Vietnam in relation to the deaths.

A service was held in memory of the victims at the Church of the Holy Name and Our Lady of the Sacred Heart in east London on Saturday evening.