By Emdad Rahman  :: Zakir Khan, Associate Director of Community Affairs at Canary Wharf Group was the host as a grand reception in honour of Civic Mayors took place in one of the world’s great business districts.

The celebratory event hosted former Mayors, Speakers and Civic Mayors of Bangladeshi origin both past and present and heralded their contribution to civic responsibilities as well as encouraging the growth of future leaders.

Khan introduced proceedings with a short history of the civic contributions of the guests. He said: “Many moons ago these people made countless sacrifices for the benefit of their communities.

“It’s strange that once they serve their terms they are forgotten. We need to remember them and celebrate them. They were first citizens and despite our political associations and affiliations we are here today to reminisce, to evaluate, to remember and to appreciate their amazing contributions.”

Barrister Shahadoth Karim, Editor of the prestigious British Bangladesh Who’s Who publication was invited to share a few words. He said: “It thrills me to be here amongst such special people. It’s no secret that our respected older folk were hugely influential in inspiring future generations and it is their humble and sincere efforts which have inspired our future generations to be integrated and to be so  hugely successful.”

British Bangladeshi Power 100 founder Abdal Ullah added: “We have achieved a lot but we still have a long way to go. Without the contribution of the elders in this room we would be decades behind in terms of our huge achievements.”

John Garwood Managing Director and Company Secretary of the Canary Wharf Group used his experiences as a West Ham United fan to highlight the positive changes he has experienced: “I have noticed a steady stream of Asian faces slowly becoming prevalent at games and this is reflective of the way this community has progressed. We are very pleased that today we are able to host heroes. Their achievements speak volumes and the younger generations have a lot to be thankful to them for.”

Nadia Shah, Mayor of Camden concluded: “I think this has been a really nice event to celebrate people’s achievements. I don’t think I’m particularly special but we have to use our position to bring our community forward. We are also in a great position to educate and inspire a large number people and basically tell them that there’s not one but many ways to reach a particular destination.

There was a glowing tribute from former Tower Hamlets Mayor Doros Ullah who gave a short and succinct presentation on how politics and the role of the Civic Mayor and Spwaker has evolved over the years. Mayor Parvez Ahmed was heralded the most prolific Mayor in terms of engagements. The first citizen of the borough of Brent celebrated his 701st engagement at the Canary Wharf event. He said: “I’m honoured to be here as a Mayor amongst so many other Mayors and I’m grateful every day for the opportunities I have had.

2017-04-26
Editor Editor
Previous: What do Asda mums have to say about getting ready for Ramadan?
Next: Govt begins VGF for 50 thousand extreme poor in Sylhet 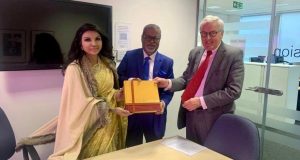